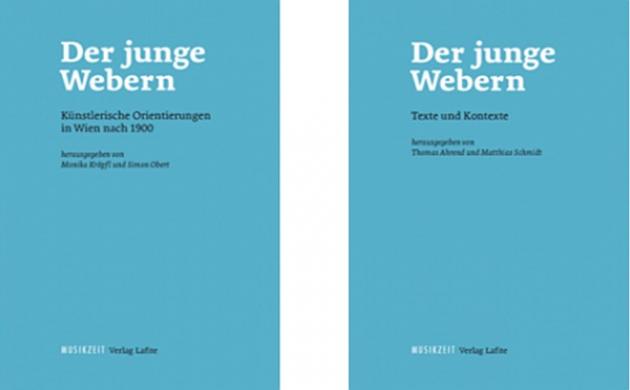 [1] For young composers in the 1950s like Boulez, Stockhausen, or Nono, the compositions of Webern were the epitome of music free of any ideological weight. Webern’s works were structured in a completely different way than those of Schoenberg and demonstrated the possibility of creating, as it were, neutral music. Webern’s compositions were considered the quintessence of intellectually transparent music. To develop Webern’s musical ideas, the concept of so-called serial music was thought the next logical step. But already by the 1960s, as Henri Pousseur put it in 1983, Webern’s “extraordinary music had almost faded into the background.” While Webern’s music was not forgotten—it was still valued highly—for actual composers it was hardly even of structural significance. From the mid-1960s, it was primarily musicologists who discovered in Webern’s music an object for analysis. His music became, to put it bluntly, synonymous with Opus 1–31.

The two volumes of Der junge Webern attempt to decipher the social-historical context of Webern’s youth, as well as his experiences during that period. The first volume, Künstlerische Orientierungen in Wien nach 1900 (Artistic Positioning in Vienna after 1900) mainly examines the cultural milieu in which Webern grew up. The material that survives from Webern’s early years is sparse and much is fragmentary. It is nearly impossible to interpret it with any historical-biographical rigor. Thus, the contributions to this volume primarily discuss and depict the various possibilities that existed “for artistic positioning in Vienna after 1900.” For the reader, it is fascinating to learn about the environment in which Webern moved while young. This gives the few biographical details we do know about Webern’s life a richness that should not be underestimated. Chapters about Viennese coffeehouse culture, the importance of the Schwarzwald School for the Schönberg Circle, or garden design in Vienna give the reader a vivid picture of the world in which Webern lived. Other chapters on Webern himself and the Viennese circles around Kokoschka, Mahler, and Schnitzler portray the conflicts between art and life to which the young Viennese composer felt himself exposed.

The second volume, Texte und Kontexte (Texts and Contexts), contains twelve chapters about Webern’s youth, together with an annotated edition of his three diaries (written 1900–1906). The contributions concentrate on select compositions in addition to Webern’s compositional ideas as expressed in his early works. A few of the chapters show how these ideas were also a decisive factor in his way of life. Altogether, it is exemplary how all of the contributions make it clear that comparing Webern’s early work to later compositions based on his own opus numbers is less important than understanding the compositions in their individual settings. Although each chapter contains reflections on later compositions, these reflections have little to do with definitions such as “earlier” or “later,” but rather underline the fascinating variety in these works, a variety that has nothing to do with historical, chronological logic. Webern’s three diaries, published here for the first time, are of particular importance with regard to Webern’s early works and are referred to in several chapters.

The two volumes collect papers presented at conferences held in Vienna and Basel; they form an exceptional pair. Complementing each other in the questions they pose, the chapters open up convincing and interesting perspectives regarding both the young Webern’s thinking and his compositions. It is possible that these perspectives will “shed a more complex light on the basis for Webern’s later development than categorically placing a divide between his early compositions and his major works” (M. Schmidt). One can only hope that the insights presented in these two volumes will give new impetus not only to research on Webern, but also to performances of his music.[1]