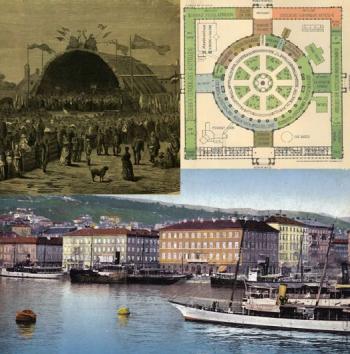 Overview of all articles

Resulting from a versatile and prolific workshop which was held at the University of Music and Performing Arts Vienna in February 2017, the present special issue on music culture/s in the late Habsburg Monarchy and successor states provides coordinates of music life in different parts of the monarchy (Vienna, Pest-Buda, Pécs, Arad, Sombor, Fiume/Rijeka), as well as beyond the border in the Ottoman Empire (Kragujevac) and in a successor state (the Kingdom of Serbs, Croats, and Slovenes, that is, the Kingdom of Yugoslavia) in the nineteenth and the early twentieth century. Seven contributions treat the performance practice of different institutions through single case studies and the process of institutionalization, including a network embodied in the association of microregional institutions, their repertoire, and cultural activities, as well as through biographies of musicians and an archaeology of music composition in the context of imperialism, pan-Slavism, nationalism, and fascism.

The aspects and approaches of the various contributions contain a wide range of perspectives on the (re)production of music in imperial Austria-Hungary from the mid-nineteenth to the early decades of the twentieth century: they discuss music in its political, social, and cultural contexts. Despite the multiplicity of subjects and (methodological) approaches collected in this issue, one might assert that all of the collected articles follow the greater unifying ambition of investigating and describing how music life was created and organized in the various regions of the Habsburg Monarchy. It is hardly surprising that the majority of the contributions feature an institutional paradigm: in reference to John Rink, one has to assert that the role of institutions in the concert life of European cities was generally significant.[1]

It is notable that the contributions are thematically linked through their accentuation of the importance of music as an instrument of nationalism—as the dominant political movement of the late nineteenth century, which generally ruled all areas of life. According to Pieter Judson, nationalism became more dynamic toward the end of the nineteenth century as social identities changed into cultural and therefore national identities, especially in the Habsburg Monarchy. Moreover, national identities were promoted through cultural arguments. And as Judson observes, cultural arguments developed in the decades after 1867 because politics became increasingly popular and more democratic in character.[2]

Celebrating the empire is the topic of the studies related to the centers of the dual monarchy by María Cáceres-Piñuel and Lili Békéssy, and partially also of the article by Katalin Kim.

María Cáceres-Piñuel’s article “From Historical Concerts to Monumental Editions: The Early Music Revivals at the Viennese International Exhibition of Music and Theater (1892)” focuses on an “immaterial” institution by investigating the early music concerts (Historische Concerte) performed on the occasion of the Viennese International Exhibition of Music and Theater of 1892. As Cáceres-Piñuel shows, this concert series—under the supervision of Guido Adler, one of the most influential pioneers of musicology as an academic discipline—also led to a monumental music editing project, Denkmäler der Tonkunst in Österreich (Monuments of Musical Art in Austria), organized by a society still in existence today.

Katalin Kim focuses on an “immaterial” institution as well. In “Demythologizing the Genesis of the Hungarian National Anthem,” she undertakes a historical deconstruction of the Hungarian national anthem. Kim investigates the real authorship of the “Hymnusz,” officially composed by Ferenc Erkel (1810–93), one of the best-known and most influential composers of Hungary in the nineteenth century. Was it effectively written by Erkel himself or rather by a team of composers around him? The search for clues leads Kim to pivotal incidents—and sources—of the (music) history of Hungary. Moreover, she discovers the source of the Hungarian national anthem in the medieval Latin hymn. Hence, it is obvious that Hungarian nationalism relied on (imperial) Catholic identity.

Nada Bezić offers a perspective on meta-nationalism in “The Hrvatski glazbeni zavod (Croatian Music Institute) in the 1920s: Jutarnji koncerti (Morning Concerts) and Intimne muzičke večeri (Intimate Musical Evenings),” a study on the history of the Croatian Music Institute in Zagreb (Hrvatski glazbeni zavod) during the 1920s. Bezić focuses mainly on the institute’s concert series and describes the program policy of the series as a turn to “Yugoslav music.” The promotion of Yugoslav music was a continuation of the pan-Slavic, that is, south Slavic, cultural policy promoted by the National Movement (Ilirski pokret) in nineteenth-century Croatia.

Another crucial way of promoting nationalism can be seen in the activities of choral societies, which were spread out geographically yet connected by the idea of a unified national culture, as Rudolf Gusztin shows in “The Institutionalization of the Choral Movement in Nineteenth-Century Hungary.” Gusztin explores the organizational processes of choral societies in various Hungarian cities, such as Pécs, Pest-Buda, and Arad. Furthermore, he considers the beginnings of the institutional framework of the choirs in the National Hungarian Choral Society, which operated (officially) starting in 1867.

However, the aforementioned cultural argument, combined with nationalistic claims, produced not only national identities but also counter-identities for “people without a nation,” as Philip Bohlman calls them.[3] The biggest of these groups were Roma and Jews. The latter are addressed in the contribution “The Construction of Jewish Identity in Nineteenth-Century Serbia: The Case of the Musician Josif Schlesinger” by Maja Vasiljević and Haris Dajč. By focusing on the Serbian composer Josif Schlesinger (1794–1870), Vasiljević and Dajč present a biographical study which investigates the position of a Jewish musician within the music life of the nineteenth century at the crossroads of the Habsburg and the Ottoman Empire.

Last but not least, a biographical approach is provided in Matej Santi’s contribution “Inventing the Italian ‘Violin Making Tradition’: Franjo/Franz/Francesco Kresnik, a Physician and Violin Maker, as Its Key Figure in a Fascist Environment.” Kresnik (1869–1943) can be seen as a key figure in the establishment of an Italian violin-making tradition in the early twentieth century, which was, according to Santi, a highly politicized field and heavily influenced by the fascist ideology.

The articles in this special issue shed light on various facets of the Habsburg Monarchy’s music culture through different discourses and aim to enrich our knowledge of the cultural and music history of this region. At this point, we would like to express our sincere gratitude to Sophie Zehetmayer for her assistance in the proofreading of the present texts, as well as to David Heyde for the English language review of the manuscript, and last but not least the former and current editorial teams of Musicologica Austriaca for their manifold support.

Cover picture: composite by Alexander Wilfing of (1) the singing contest at the 1868 national gathering in Debrecen (picture by Mihály Munkácsy, published in Vasárnapi Újság, August 14, 1892), by courtesy of National Széchényi Library, Budapest, Digital Image Archive; (2) the rotunda plan of the International Exhibition for Music and Theater Vienna 1892, published in the Leporello fanfold Internationale Ausstellung für Musik- und Theaterwesen Wien 1892 (Vienna: Max Herzig, 1892); and (3) Riva Cristoforo Colombo, Fiume, by courtesy of the Maritime and History Museum of the Croatian Littoral.