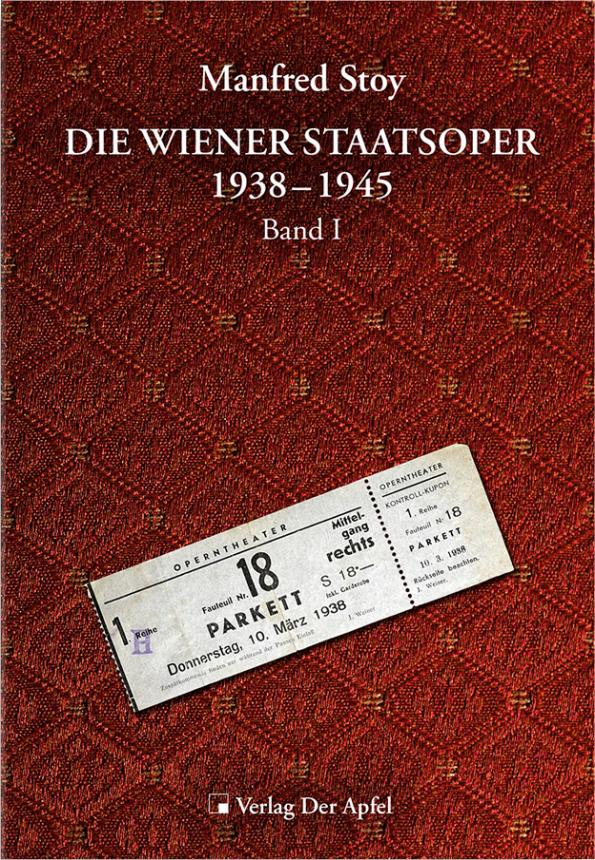 [1] Although the historical reappraisal of musical institutions under National Socialism was slow to begin, it is now in full swing. Examples include the studies by Fritz Trümpi and Bernadette Mayrhofer on the Vienna Philharmonic,[1]  the somewhat older work by Misha Aster on the Berlin Philharmonic,[2] as well as my own recent appraisal of the Beethoven-Haus Bonn.[3] All based on extensive archival research, what they have in common is that they question the customary justification narratives and present well-balanced portrayals of the many ways these institutions participated in the crimes of the Nazis.

Now the first part of a three-volume history of the Vienna State Opera from 1938 to 1945 by Manfred Stoy has appeared. Stoy was long-time archivist and librarian at the Institut für Österreichische Geschichtsforschung (Institute of Austrian Historical Research) and he published a Nazi history of that institution a decade ago.[4] For this new study he, too, had access to extensive archival sources. The volume is divided into two blocks: Stoy first examines the period between the beginning of the year 1938 and the “Anschluss” in March, and then examines the first months of Nazi rule until the end of the musical season on August 31, 1938. Both blocks are subdivided into several chapters, these often focusing on specific groups of people or, on occasion, specific events. The divisions are however not always convincing. For example, chapter 1 of the first block, entitled “The Director,” is a mere two and a half lines long and reads as follows: “Regarding Erwin Kerber, the facts already mentioned and those in the following chapter should be considered, as well as the remarks in the studies by Ingeborg Rotter and Oliver Rathkolb” (38).[5] In other words: the contents one would expect to find here are somewhere else, in this or other books. Such examples abound, and they make the text difficult to follow.

Of particular value is the information about the artists and other members of the State Opera about whom Stoy did do research. A central element of the volume consists of short biographical sketches of the artists and others at the State Opera who were dismissed after March 13, 1938: not only those who were persecuted for racial or political reasons, but also persons who evidently left the State Opera because of their age or other reasons (118–196). While many of these biographies begin only with 1937/38, they go on to describe the later fate of these individuals. Nonetheless, desirable would have been a more solid categorization or at least some systematic information about how and why these people were driven away.[6] The same holds true for comparable chapters, such as the lists of singers in which Stoy seems to mention every detail about their contracts he came across. A further problem arises from the work’s overall structure of being divided into three volumes; members who left (or had to leave) the State Opera in 1939 are not listed here. Occasionally, however, such people are referred to in the biographical sketches about others.

This very descriptive tendency runs throughout the entire book. There are many multiple-page lists, such as the more than four pages listing performances during the first quarter of 1938, each including information about the most important artists who took part (79–83). The documentary value of this list, however, is limited due to the omission of repeated performances whose cast was only slightly different. Another example is the record of the guests at the Opera Ball on January 15. Here, Stoy provides two pages with the names of a total of 82 persons, including their titles and the people accompanying them, but he does not provide any analysis that might have given this long list of names some sort of systematic order (84–85). For valuable information such as this, an editorial approach might have been more appropriate. In its execution, the book seems less a systematic analysis based on guiding questions, but more like an encyclopedia.

However, it is not only the methodical approach that is problematic; interpretations based on outdated viewpoints and a limited knowledge of relevant scholarly literature[7] have also led to questionable results. In the 1950s, Stoy was a member of the Wiener Sängerknaben (Vienna Boys Choir), which often sang in performances at the State Opera when a children’s choir was needed. Perhaps these personal memories are one reason that the author’s attachment to his object of investigation is often quite apparent. Also, the author considers his private stays in East Germany in the 1970s and 1980s to have been beneficial for his study: only if one has actually experienced everyday life under a dictatorship, he argues, can one really judge the actions of people during the Nazi dictatorship (18). Stoy does not seem to reflect that this idea belongs to the widespread apologetic narrative of the post-war period—an argument, incidentally, that was not only levelled at people born after the war, but above all at those persons who had been forced into exile during the Nazi era for whatever reason.

Personal affinity to the institution, inadequate familiarity with relevant literature, and a certain identification with the protagonists of his study contribute significantly to an apologetic tendency that cannot be overlooked. This becomes clear not least in the conclusion, in which Stoy characterizes the cultural institutions as unwitting pawns of the regime rather than its fully cognizant supporters. To the contrary, he commends “the artists working in the Third Reich” who “helped people under pressure from the dictatorship to forget, for a short while, the increasing burdens of everyday life” (350).[8] Moreover, they are credited with giving especially younger people in the audience “hope for better times” (341).[9] In this way, the State Opera as an institution is integrated into a resistance narrative whereby it is depicted as defending itself against a Nazism that came from outside.

[2] Dubious formulations crop up repeatedly. For example, Stoy speaks of the “dropping out” (“Ausfall”) of Jewish artists and other personnel “due to the question of race” (“bedingt durch die Rassenfrage”). This wording makes the expulsion of Jews from the opera seem like a circumstance imposed from above in which the opera management played no significant role. That State Opera Director Erwin Kerber banned Jewish artists from entering the opera immediately after the “Anschluss” is relativized by Stoy as part of the general anti-Semitic sentiment in Vienna and the consequent danger that opera operations might have been disrupted (106 and 110). But Kerber’s anti-Semitic statements cited elsewhere (36), even if they are apparently not perceived as such, are not problematized. Rather, according to Stoy, a racist climate had been created apparently in equal measure by both non-Jews and Jews when Kerber suffered Jewish attacks in 1937 in favor of the Jewish conductor Bruno Walter (36). The linguistic equivalence of perpetrators and victims is probably due only to an unfortunate choice of words and was not intended; nonetheless, it is characteristic of the analytical weaknesses of this book. It would have been desirable, for example, if a separate section on the manifestly widespread anti-Semitism at the State Opera had been included. But such a chapter is lacking; instead, while anti-Semitic statements and actions are regularly mentioned in passing, they threaten to get lost in the mass of details.

Certain appraisals of people and events are also problematic. For instance, the assessment, based for the most part on contemporaneous reports, of the conductor Hans Knappertsbusch, who was a permanent guest conductor at the Staatsoper from 1936 and also held a position in the State Opera’s directorship, is more than mild: “In the relevant literature, his conduct is only praised” (23).[10] Stoy overlooks the protest of the “Richard Wagner City of Munich” against Thomas Mann that Knappertsbusch initiated, a protest that contributed significantly to driving the winner of the Nobel Prize for Literature into exile.[11] In addition, the dismissal of Knappertsbusch at the Bavarian State Opera in 1935 was by no means only because of careless political remarks, but was not least due also to musical reasons and Adolf Hitler’s comprehensive restructuring plans.[12] Indeed, his successful career in Vienna under Nazi rule shows that the resistance myth Knappertsbusch established about himself after the war must be critically scrutinized.

In some places the reader would have liked more information, as for example about the Nationalsozialistische Betriebszellenorganisation (NSBO, the National Socialist Factory Cell Organization). Trumpeter Helmut Wobisch founded a section of this Nazi worker’s organization at the State Opera in 1932. Stoy confines himself to reiterating the post-war account that only eight staff members joined the organization, but does not discuss the problematic nature of this number, which on the one hand might result from misrepresentation and on the other, from the death or emigration of numerous members. The same applies to the 26 persons who had already joined the Nazi Party before 1938. Based on these brief statistical figures, Stoy comes to the conclusion, with no further evidence, that these memberships did not affect music operations (35). But though in most companies the NSBO was unable to achieve any concrete influence on corporate management, it was characteristic of the organization that it did radicalize corporate culture. Accordingly, Goebbels honored Wobisch by bestowing him the title Kammermusiker on April 19, 1938 (257).

The analytical shortcomings of this volume, which are presented here by means of a few examples, leave an unsatisfactory impression of Manfred Stoy’s study, despite the fact that its empirical results are valuable in many respects and make the book a rich quarry for historians. It is possible that if the book had been given a structure that was more editorial as well as encyclopedic, this would have been better suited for displaying Stoy’s strengths. It is to be hoped that the two subsequent volumes will move more in this direction.[13]